“The city of juncture” is focusing on the unique Japanese junctions’ scenery in urban area especially in Tokyo and Osaka. Since those huge structures were built a lot in urban areas with limited space in order to organizing traffic, we have an advantage to see them at very close distance; some of them have very unique intertwined exteriors

That’s why they’ve been attract many Japanese photographers, who love their unique exteriors comes with many curves, lines, decayed metals and pipes.

Even though “Junction nightscape” is much beautiful than capturing them during day time, those glaring lights and deep shadows were just obstacles to capture the genuine structures. Rather using day time long exposure technique is preferable way for focusing the subjects; eliminating moving objects, cars and pedestrians. Plus panorama technique can capture wide surroundings atmosphere with much less distortion instead of using wide angle lenses. 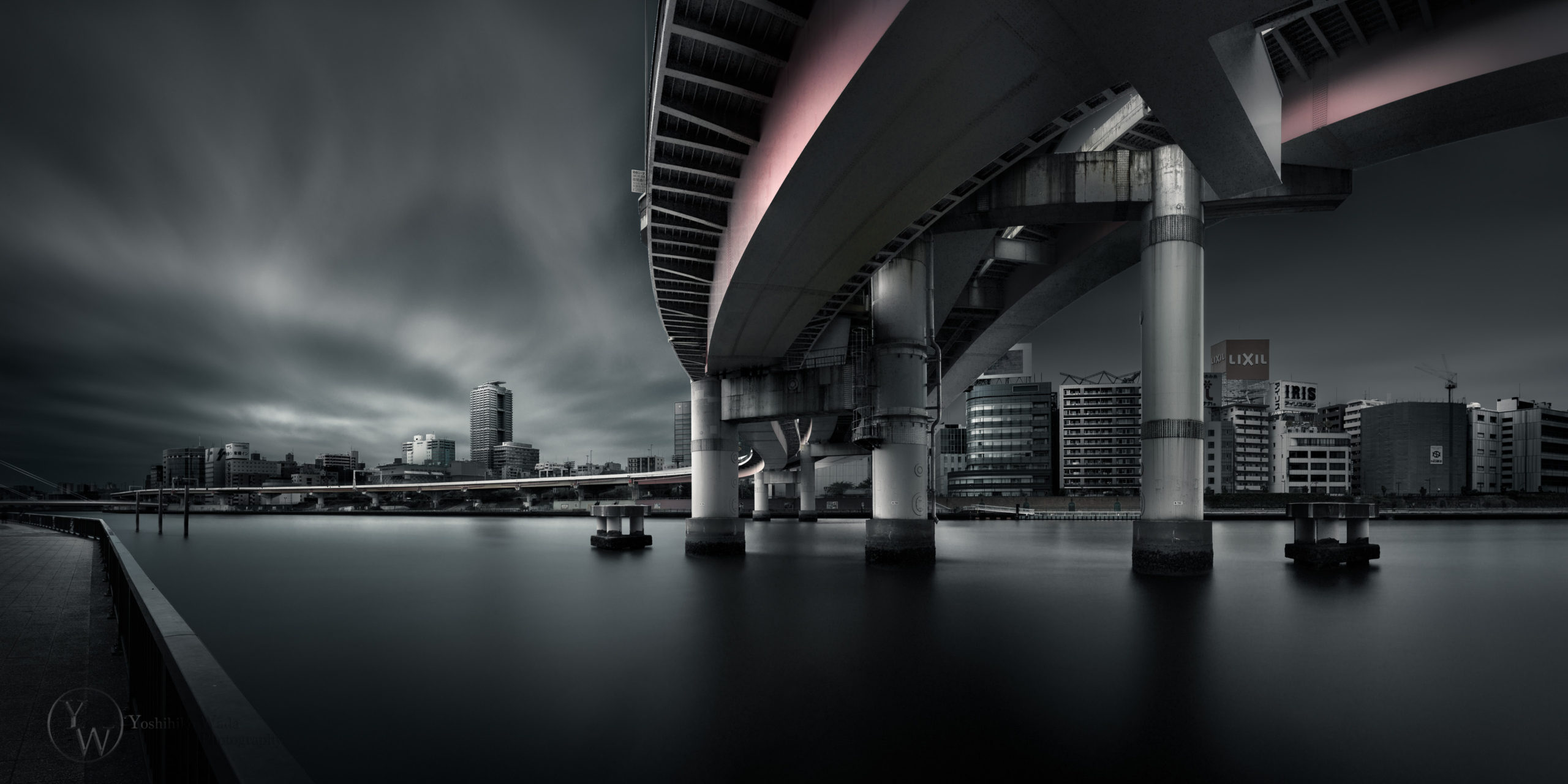 Ⅰ. The Thin Red Line
Location: Ryogoku-Junction, Tokyo.
The image is a Stitched panorama with both vertically and horizontally (total of 6 images). The location is popular for taking a night-scape, but I took a different approach. To capture all the images I needed, it took an hour in a day at the mid-summer in the morning. Japanese junctions are generally colored for fit the urban scenery: red, green, blue is mostly used. 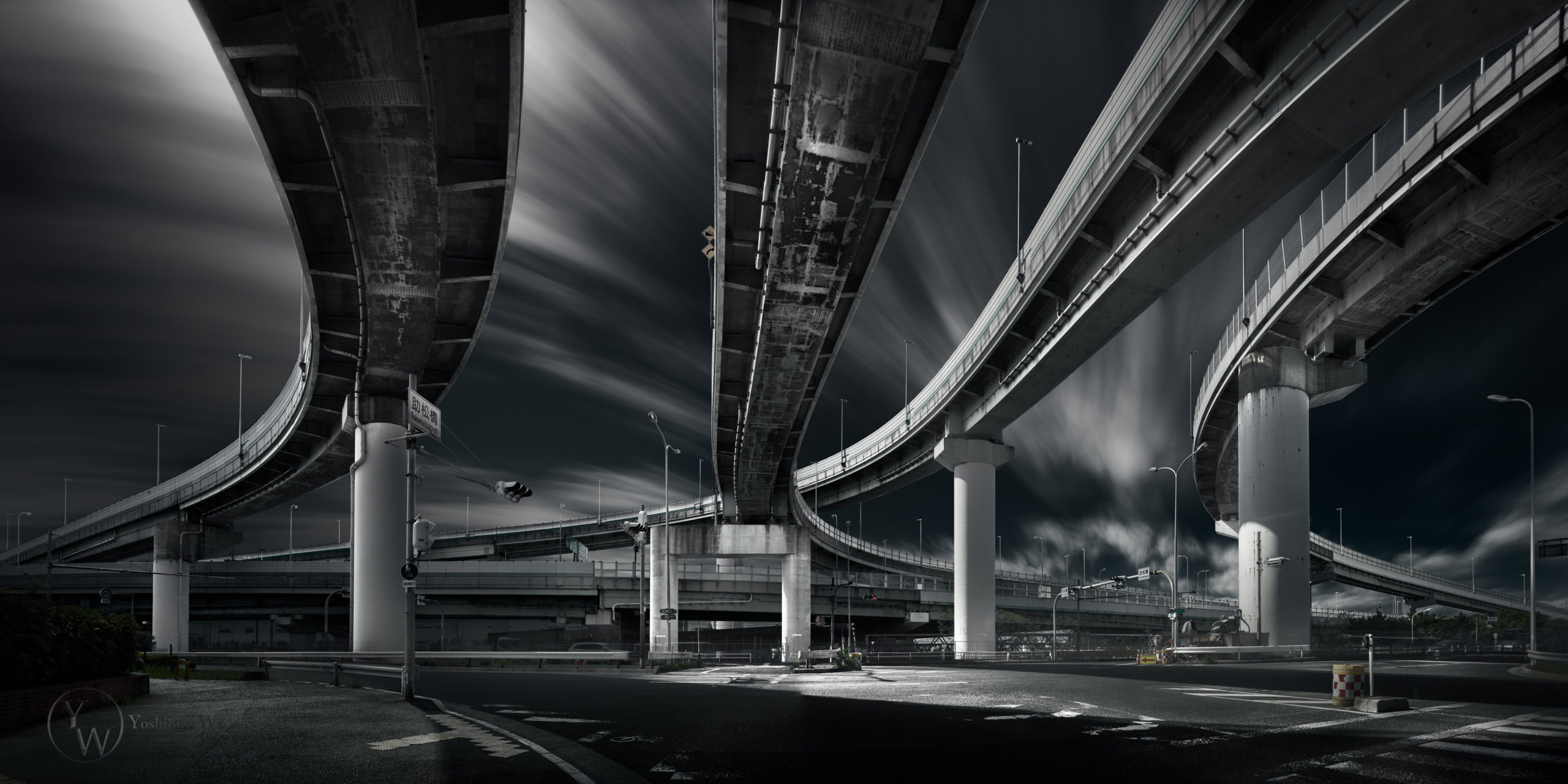 Ⅱ. The Urban Legacy
Location: Sukematsu-Junction, Osaka.
The image is a 4 vertical stitched panorama; Each image was 180 seconds long exposure, so total exposure was 720 seconds long exposure. Actually this was the first image for the series which I took in Apr, 2016. To complete whole images in the series, it took 2 years, and finally were disclosed in late 2017

Ⅲ. The Throne of Magnate
Location : Hakozaki-Junction, Tokyo.
Hakozaki is the most famous JCT in Tokyo. Most people are surprised and look at its intertwined front exteriors, but I personally like back side of it: symmetry looking with not only the structure but combination with the upper highways and the under passes. A four vertical stitched panorama image, each was a 60 seconds exposure: fairly short long exposure for just eliminating pedestrians and vehicles. 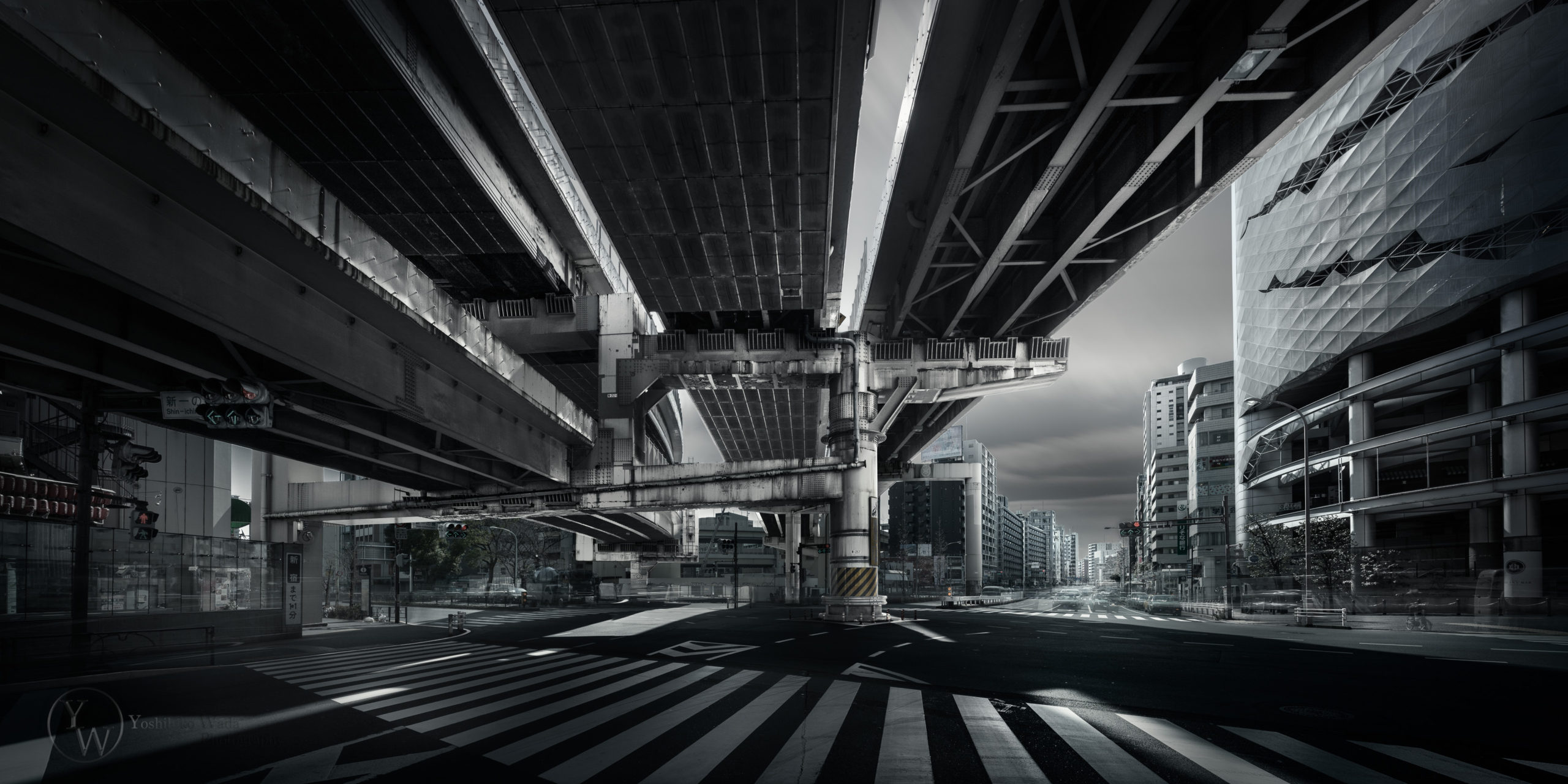 Ⅳ. The Hidden Troy
Location : Ichinohashi-Junction,Minato Ward,Tokyo.
In the middle of Tokyo, Ropponngi, you can see the huge metal horse.
It looks like a modern art combine with mass of concrete.
You can observe them with various angles by walking around under passes.
“Imagination” is the key to enjoy seeing these inorganic junctions. What do you imagine? 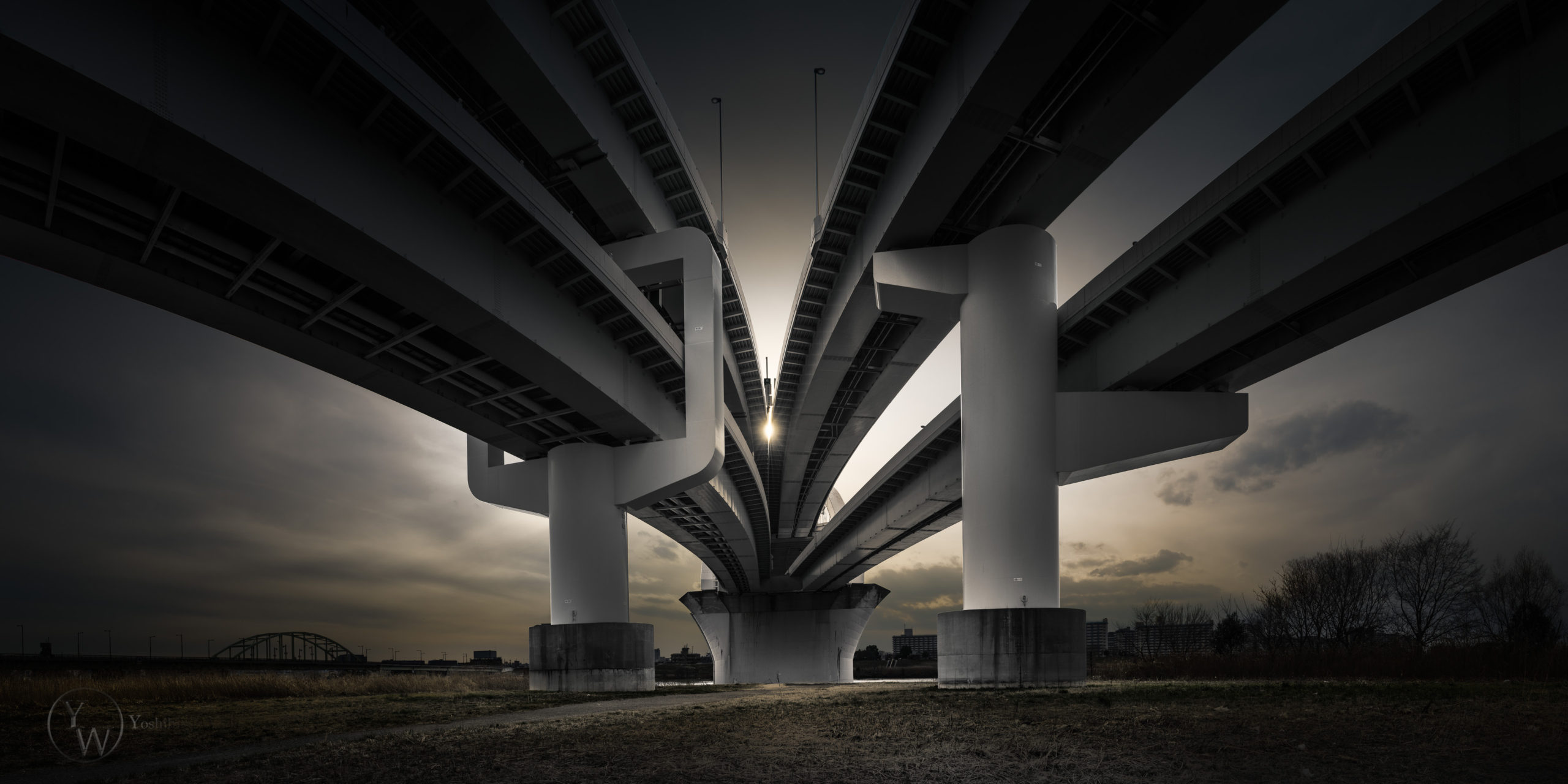 Ⅴ. The Dawn of Legacy
Location: Kouhoku-JCT, Adachi Ward, Tokyo
It looks like a huge monument standing at a grass field : the motif is “The gigantic spread key”. Luckily, when I visited there, the sun took a great position: the light came from the just middle of the center joint.
With this angle, you barley see the white bridge”gosiki-sakura-ohashi”, which means 5 colors of cherry blossom-bridge; many photographers tend to come for the beautiful illumination of the bridge during a night.

Ⅵ. The Mirage at the Aqua city
Location: Ariake JCT, Koto Ward, Tokyo
If you want to see a junction during the Tokyo tour, I recommend this “Ariake JCT”.
As a large artificial island in Tokyo Bay, these areas are called “Odaiba”; since they have many sightseeing spots including Tokyo International Exhibition Center, Rainbow bridge, you can use your time efficiently.
Yurikamome rapid transit line being there from center of Tokyo. 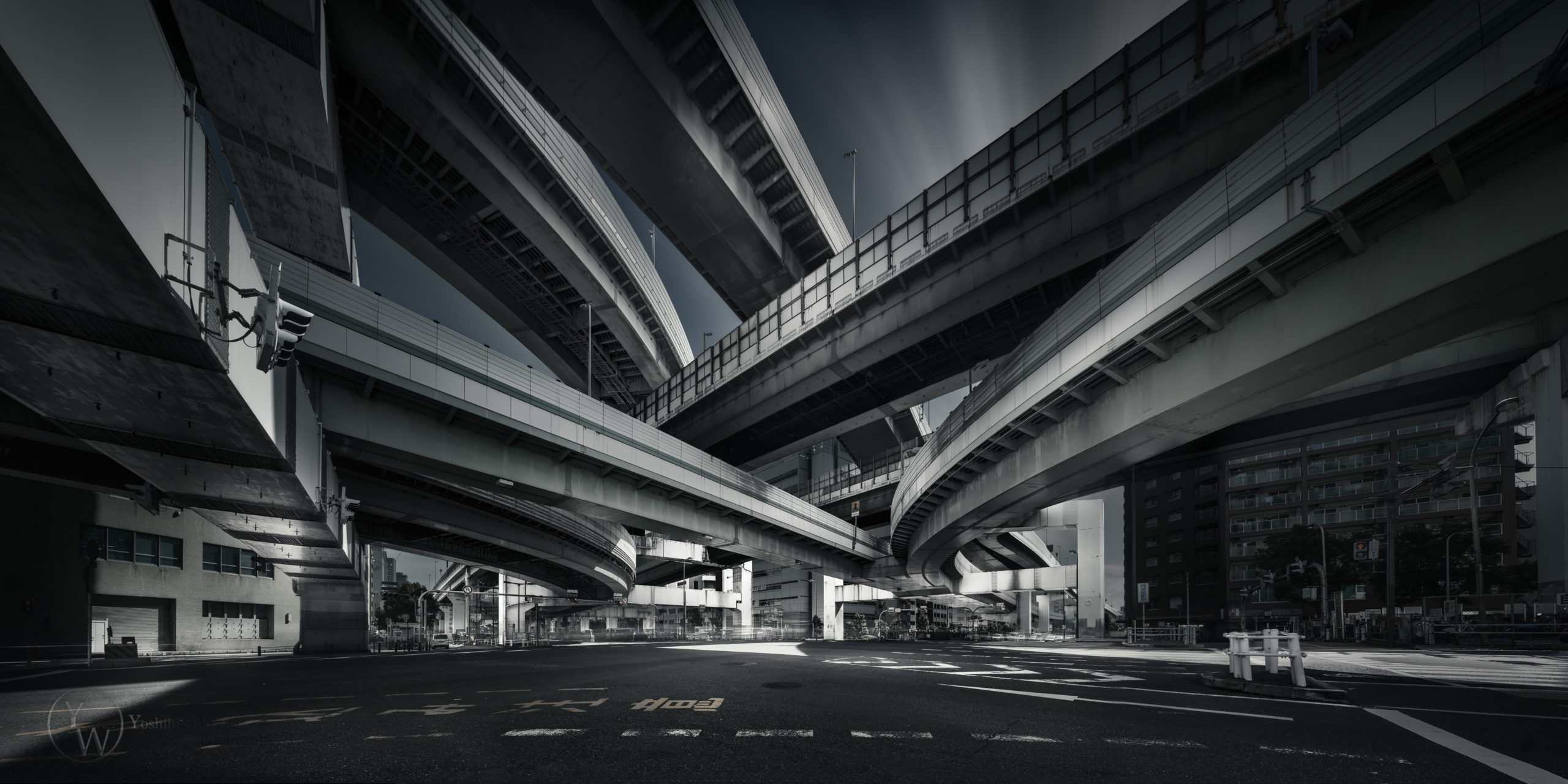 Ⅶ. The Gates of Serpentine
Location: Awaza Junction, Osaka city, Osaka.
Just out from the Awaza subway station your eyes glued to these entwined highways; this is the most famous junction in Osaka, Awaza-JCT.
The intertwined exterior makes me imagine Medusa from Greek mythology.
To capture all the images I need, to make panorama plus long exposure, I was standing there like a stone. 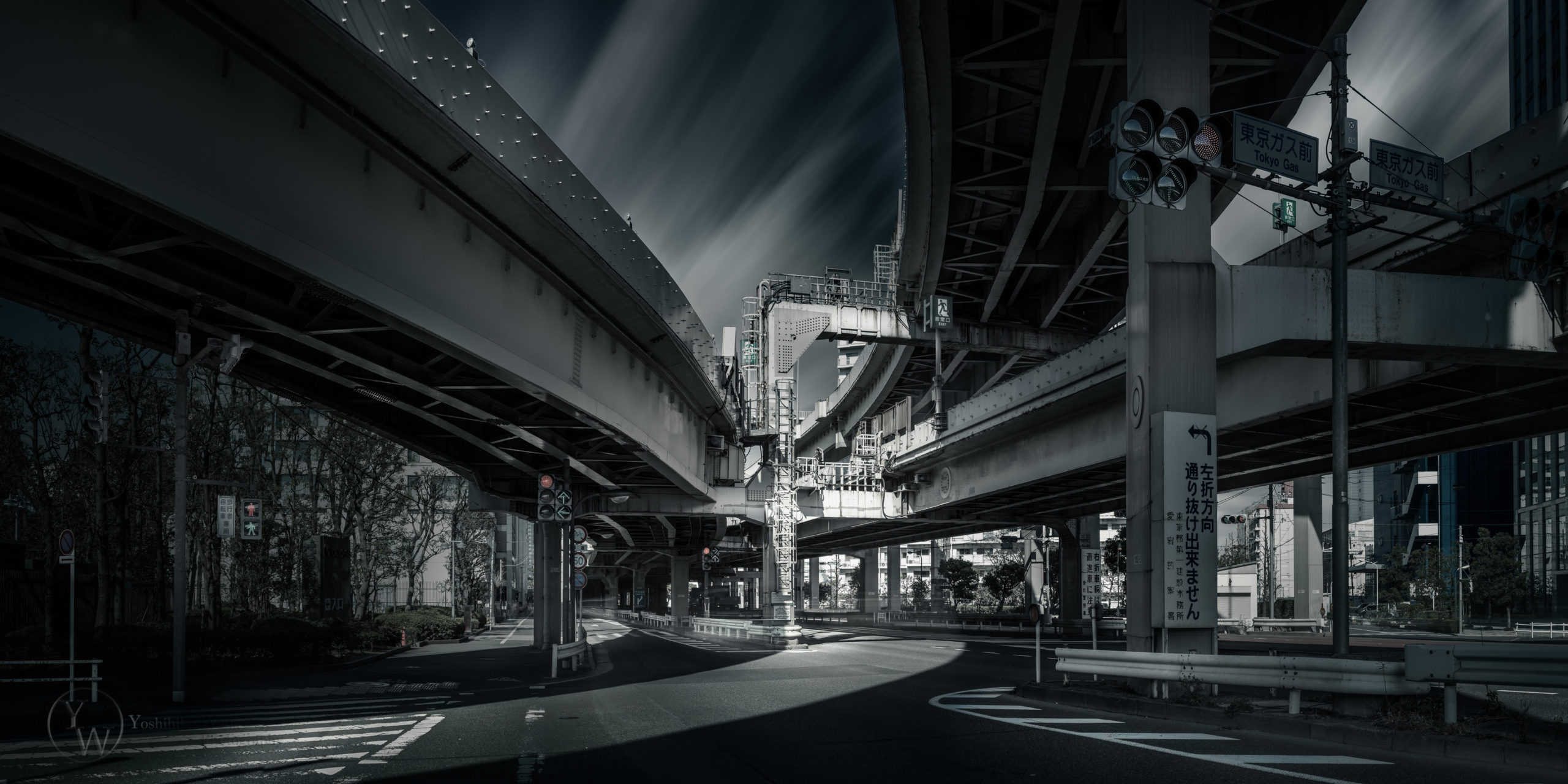 Ⅷ. The abandoned  Cross
Location:Hamazakibashi-JCT, Mianoto Ward, Tokyo
The junction is between “Tokyo Tower” and “Rainbow Bridge” where most popular area for tourist. Though the junction is so fitting the urbanscape, people tend to forget its uniqueness. You can see the huge connections closely. This location is much popular for the night shooters. 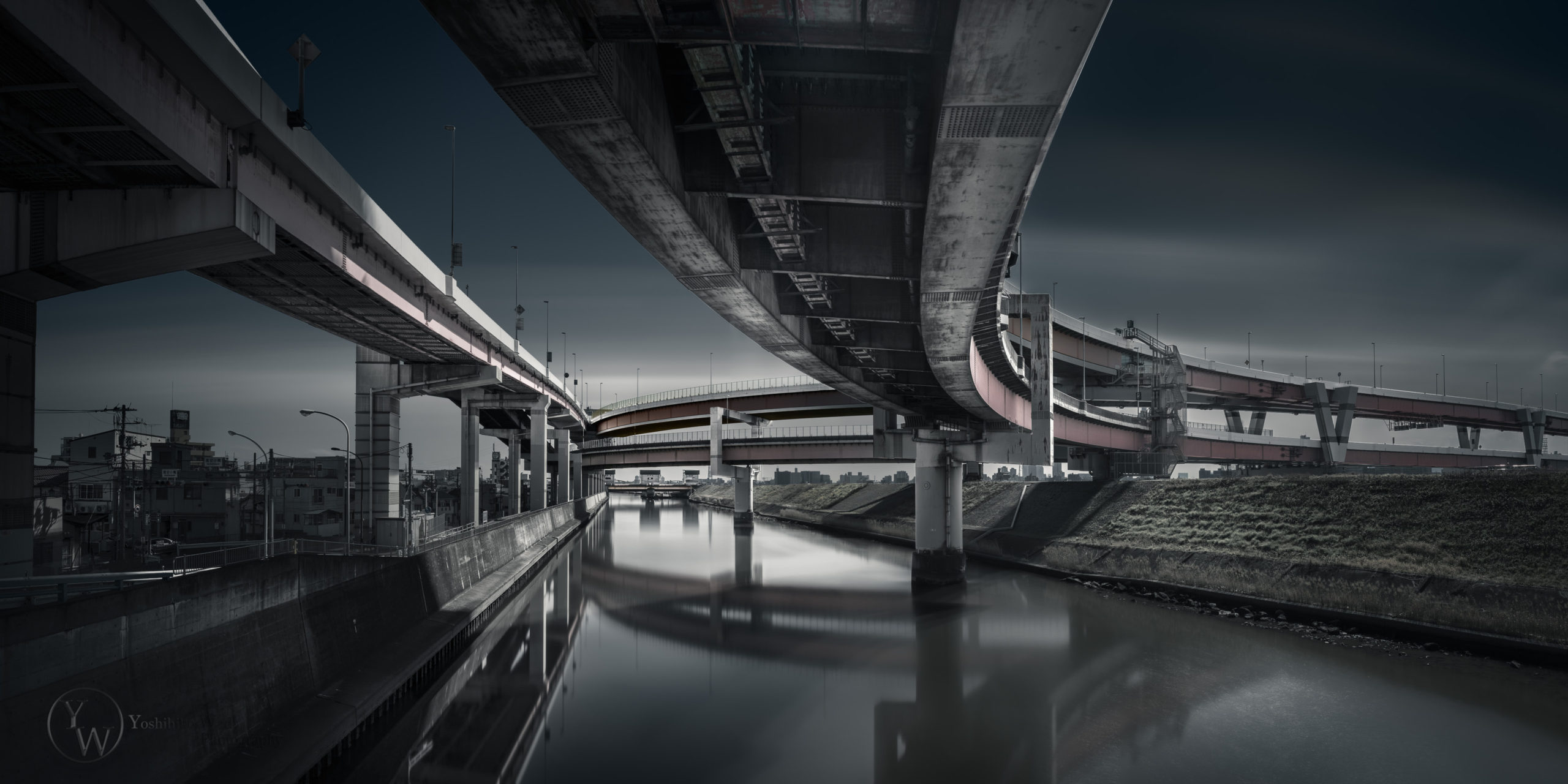 Ⅸ.Tails of the Dragon
Location: Horikiri-JCT, Katsushika Ward, Tokyo
“Horikiri” means “moat” in English. During Edo period these moat guard Edo( current Tokyo) and Edo-castle against enemies.
Being located in the suburb Tokyo, until early 1930, most of these areas were farming village; you can still see people playing baseball in the field, walking with a dog around a bank nearby Arakawa-river. 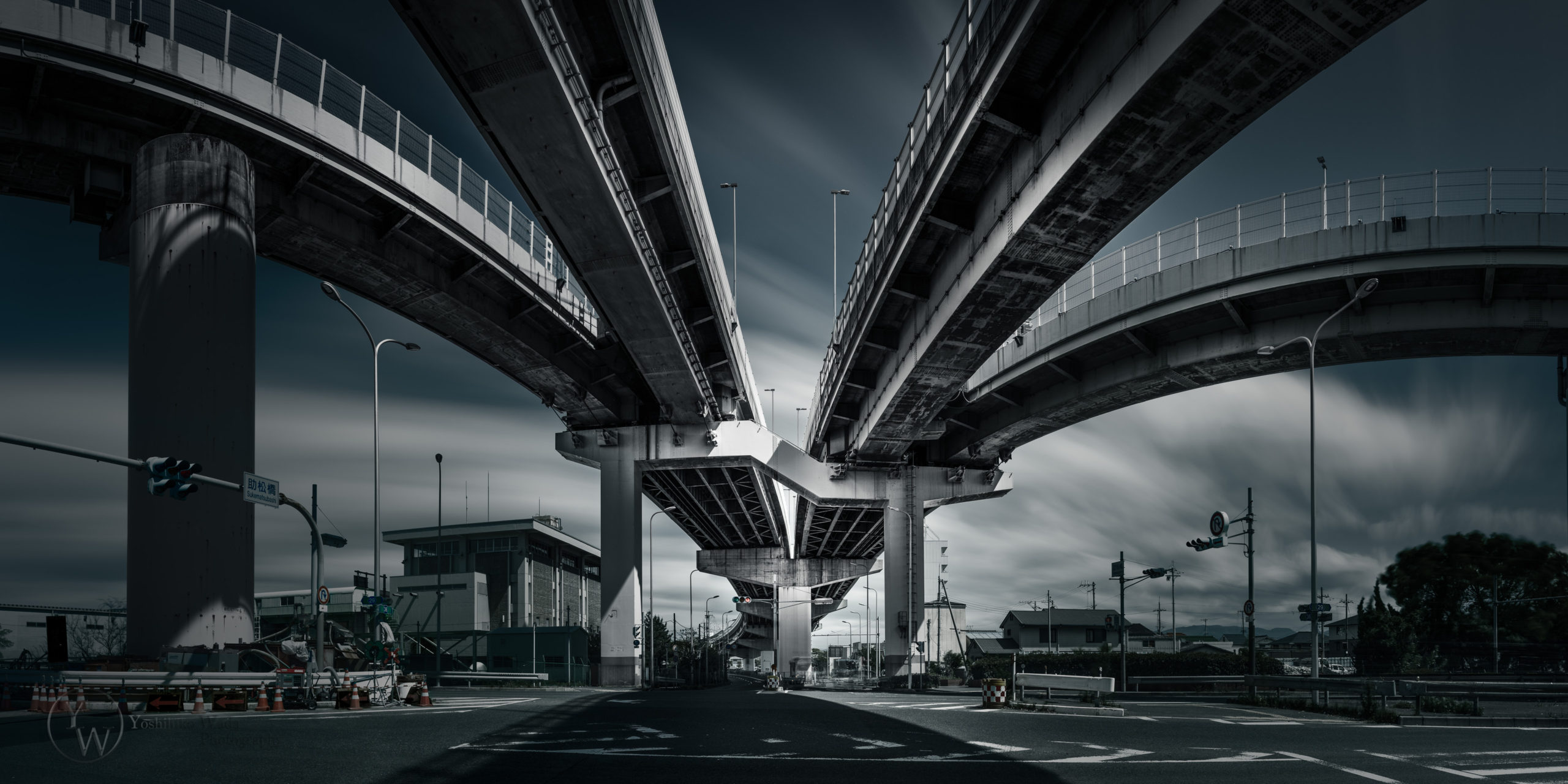 Ⅹ. The Last Kraken
Location: Sukematsu-Junction, Izumi-Otsu, Osaka.
This was another image from Sukematsu-jct (same location with the 2nd image) but taken with the just opposite angle. Even though seeing the same JCT, the scenery changes when you change the perspective. You might think interesting that seeing private houses just nearby the huge junction, but they are ordinary scenery in urban area, Japan.